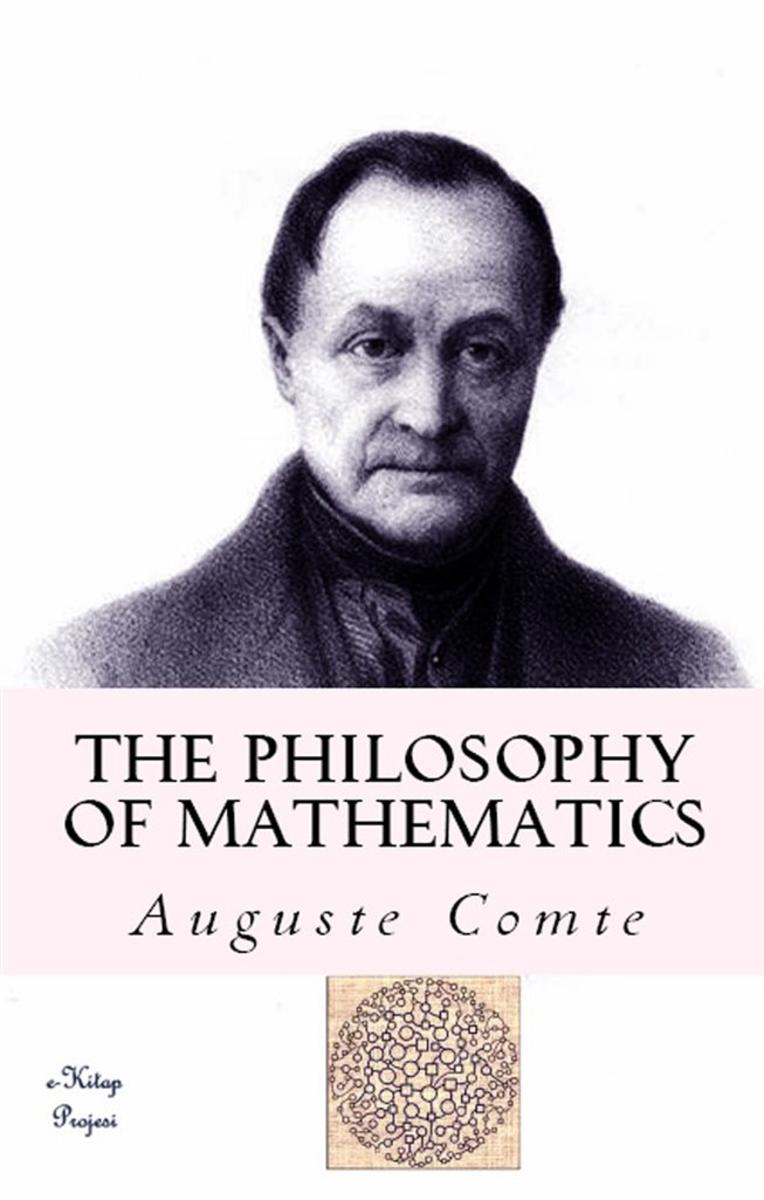 The Philosophy of Mathematics

uguste Marie François Xavier Comte (1798 –1857), better known A as Auguste Comte was a French philosopher. He was a founder of the discipline of sociology and of thedoctrine of positivism. He is sometimes regarded as the first philosopher of science in the modern sense of the term.Influenced by the utopian socialist Henri Saint-Simon, Comte developed thepositive philosophy in an attempt to remedy the social malaise of the French Revolution, calling for a new social doctrine based on the sciences. Comte was a major influence on 19th-century thought, influencing the work of social thinkers such as Karl Marx, John Stuart Mill, and George Eliot. His concept of Sociologie and social evolutionism set the tone for early social theorists and anthropologists such as Harriet Martineau and Herbert Spencer, evolving into modern academic sociology presented by Émile Durkheim as practical and objective social research.Comte's social theories culminated in the "Religion of Humanity", which influenced the development of religious humanist and secular humanist organizations in the 19th century. Comte likewise coined the word altruisme (altruism).Auguste Comte was born in Montpellier, Hérault on 19 January 1798. After attending the Lycée Joffre and then theUniversity of Montpellier, Comte was admitted to the École Polytechnique in Paris. The École Polytechnique was notable for its adherence to the French ideals of republicanism and progress. The École closed in 1816 for reorganization, however, and Comte continued his studies at the medical school at Montpellier. When the École Polytechnique reopened, he did not request readmission.Following his return to Montpellier, Comte soon came to see unbridgeable differences with his Catholic and monarchist family and set off again for Paris, earning money by small jobs. In August 1817 he found an apartment at 36 rue Bonaparte in Paris (where he lived until 1822) and later that year he became a student and secretary to Henri de Saint-Simon, who brought Comte into contact with intellectual society and greatly influenced his thought therefrom. During that time Comte published his first essays in the various publications headed by Saint-Simon, L'Industrie, Le Politique, and L'Organisateur (Charles Dunoyerand Charles Comte's Le Censeur Européen), although he would not publish under his own name until 1819's "La séparation générale entre les opinions et les désirs" ("The general separation of opinions and desires"). In 1824, Comte left Saint-Simon, again because of unbridgeable differences. Comte published a Plan de travaux scientifiques nécessaires pour réorganiser la société (1822) (Plan of scientific studies necessary for the reorganization of society). But he failed to get an academic post. His day-to-day life depended on sponsors and financial help from friends. Debates rage as to how much Comte appropriated the work of Saint-Simon.Comte married Caroline Massin in 1825. In 1826, he was taken to a mental health hospital, but left without being cured – only stabilized by French alienist Jean-Étienne Dominique Esquirol – so that he could work again on his plan (he would later attempt suicide in 1827 by jumping off the Pont des Arts). In the time between this and their divorce in 1842, he published the six volumes of his Cours.Comte also developed a close friendship with John Stuart Mill. From 1844, he fell deeply in love with the Catholic Clotilde de Vaux, although because she was not divorced from her first husband their love was never consummated. After her death in 1846 this love became quasi-religious, and Comte, working closely with Mill (who was refining his own such system) developed a new "Religion of Humanity". John Kells Ingram, an adherent of Comte, visited him in Paris in 1855.He published four volumes of Système de politique positive (1851–1854). His final work, the first volume of "La Synthèse Subjective" ("The Subjective Synthesis"), was published in 1856.* * * * *

What is the Philosophy of Mathematics?

he pleasure and profit which the translator has Treceived from the great work here presented, have induced him to lay it before his fellow-teachers and students of Mathematics in a more accessible form than that in which it has hitherto appeared. The want of a comprehensive map of the wide region of mathematical science—a bird's-eye view of its leading features, and of the true bearings and relations of all its parts—is felt by every thoughtful student. He is like the visitor to a great city, who gets no just idea of its extent and situation till he has seen it from some commanding eminence. To have a panoramic view of the whole district—presenting at one glance all the parts in due co-ordination, and the darkest nooks clearly shown—is invaluable to either traveller or student. It is this which has been most perfectly accomplished for mathematical science by the author whose work is here presented.Clearness and depth, comprehensiveness and precision, have never, perhaps, been so remarkably united as in Auguste Comte. He views his subject from an elevation which gives to each part of the complex whole its true position and value, while his telescopic glance loses none of the needful details, and not only itself pierces to the heart of the matter, but converts its opaqueness into such transparent crystal, that other eyes are enabled to see as deeply into it as his own.Any mathematician who peruses this volume will need no other justification of the high opinion here expressed; but others may appreciate the following endorsements of well-known authorities. Mill, in his "Logic," calls the work of M. Comte "by far the greatest yet produced on the Philosophy of the sciences;" and adds, "of this admirable work, one of the most admirable portions is that in which he may truly be said to have created the Philosophy of the higher Mathematics:" Morell, in his "Speculative Philosophy of Europe," says, "The classification given of the sciences at large, and their regular order of development, is unquestionably a master-piece of scientific thinking, as simple as it is comprehensive;" and Lewes, in his "Biographical History of Philosophy," names Comte "the Bacon of the nineteenth century," and says, "I unhesitatingly record my conviction that this is the greatest work of our age."The complete work of M. Comte—his "Cours de Philosophie Positive"—fills six large octavo volumes, of six or seven hundred pages each, two thirds of the first volume comprising the purely mathematical portion. The great bulk of the "Course" is the probable cause of the fewness of those to whom even this section of it is known. Its presentation in its present form is therefore felt by the translator to be a most useful contribution to mathematical progress in this country. The comprehensiveness of the style of the author—grasping all possible forms of an idea in one Briarean sentence, armed at all points against leaving any opening for mistake or forgetfulness—occasionally verges upon cumbersomeness and formality. The translator has, therefore, sometimes taken the liberty of breaking up or condensing a long sentence, and omitting a few passages not absolutely necessary, or referring to the peculiar "Positive philosophy" of the author; but he has generally aimed at a conscientious fidelity to the original. It has often been difficult to retain its fine shades and subtile distinctions of meaning, and, at the same time, replace the peculiarly appropriate French idioms by corresponding English ones. The attempt, however, has always been made, though, when the best course has been at all doubtful, the language of the original has been followed as closely as possible, and, when necessary, smoothness and grace have been unhesitatingly sacrificed to the higher attributes of clearness and precision.Some forms of expression may strike the reader as unusual, but they have been retained because they were characteristic, not of the mere language of the original, but of its spirit. When a great thinker has clothed his conceptions in phrases which are singular even in his own tongue, he who professes to translate him is bound faithfully to preserve such forms of speech, as far as is practicable; and this has been here done with respect to such peculiarities of expression as belong to the author, not as a foreigner, but as an individual—not because he writes in French, but because he is Auguste Comte.The young student of Mathematics should not attempt to read the whole of this volume at once, but should peruse each portion of it in connexion with the temporary subject of his special study: the first chapter of the first book, for example, while he is studying Algebra; the first chapter of the second book, when he has made some progress in Geometry; and so with the rest. Passages which are obscure at the first reading will brighten up at the second; and as his own studies cover a larger portion of the field of Mathematics, he will see more and more clearly their relations to one another, and to those which he is next to take up. For this end he is urgently recommended to obtain a perfect familiarity with the "Analytical Table of Contents," which maps out the whole subject, the grand divisions of which are also indicated in the Tabular View facing the title-page. Corresponding heads will be found in the body of the work, the principal divisions being in small capitals, and the subdivisions in Italics. For these details the translator alone is responsible.

lthough Mathematical Science is the most ancient and Athe most perfect of all, yet the general idea which we ought to form of it has not yet been clearly determined. Its definition and its principal divisions have remained till now vague and uncertain. Indeed the plural name—"The Mathematics"—by which we commonly designate it, would alone suffice to indicate the want of unity in the common conception of it.In truth, it was not till the commencement of the last century that the different fundamental conceptions which constitute this great science were each of them sufficiently developed to permit the true spirit of the whole to manifest itself with clearness. Since that epoch the attention of geometers has been too exclusively absorbed by the special perfecting of the different branches, and by the application which they have made of them to the most important laws of the universe, to allow them to give due attention to the general system of the science.But at the present time the progress of the special departments is no longer so rapid as to forbid the contemplation of the whole. The science of mathematics is now sufficiently developed, both in itself and as to its most essential application, to have arrived at that state of consistency in which we ought to strive to arrange its different parts in a single system, in order to prepare for new advances. We may even observe that the last important improvements of the science have directly paved the way for this important philosophical operation, by impressing on its principal parts a character of unity which did not previously exist.To form a just idea of the object of mathematical science, we may start from the indefinite and meaningless definition of it usually given, in calling it "The science of magnitudes," or, which is more definite, "The science which has for its object the measurement of magnitudes." Let us see how we can rise from this rough sketch (which is singularly deficient in precision and depth, though, at bottom, just) to a veritable definition, worthy of the importance, the extent, and the difficulty of the science.

THE OBJECT OF MATHEMATICS.