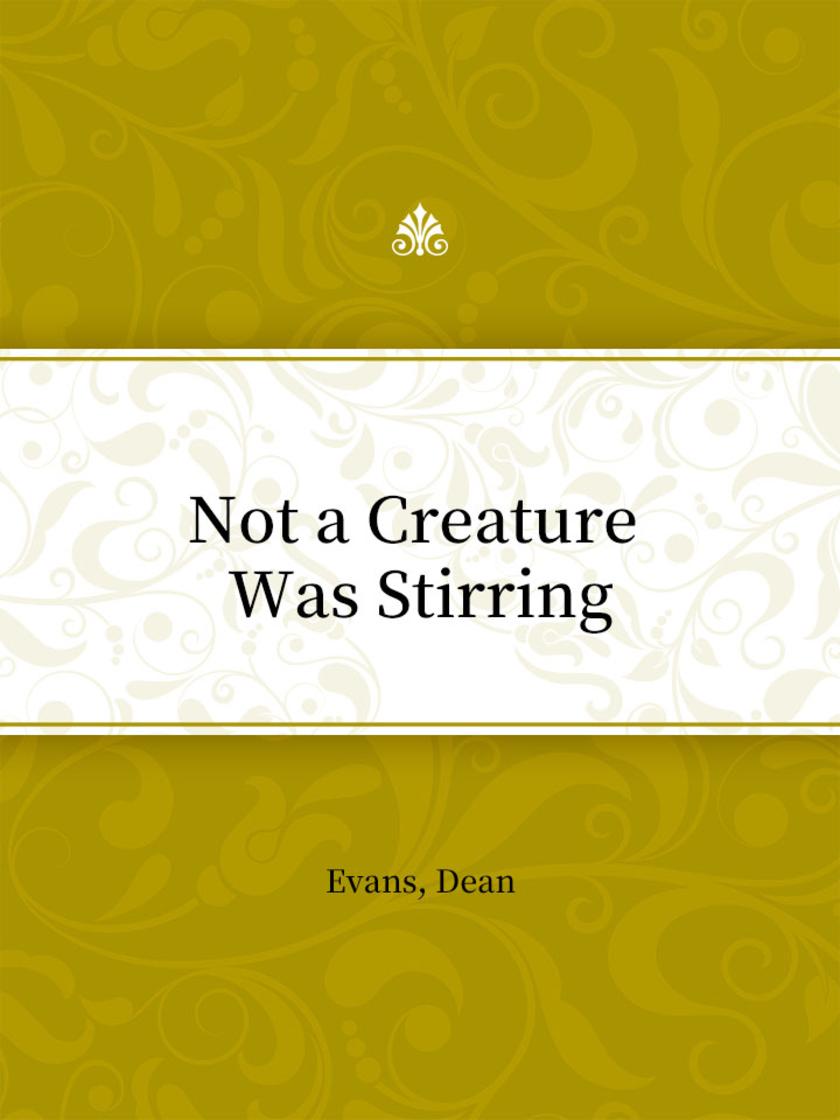 Not a Creature Was Stirring试读：

Not a Creature Was Stirring

作者：Evans,Dean排版：HMM出版时间：2018-01-30本书由当当数字商店（公版书）授权北京当当科文电子商务有限公司制作与发行— · 版权所有 侵权必究 · —This could be a Christmas story. If it is, itshows one way peace on Earth can be attained!

He was a tall, hard man with skin the color of very old iodine. When he climbed up out of the vertical shaft of his small gold mine, The Lousy Disappointment, he could have been taken for an Indian, he was that dark. Except, of course, that Indians didn't exist any more in 1982. His name was Tom Gannett and he was about forty years old and he didn't realize his own uniqueness.

When he made it to his feet, the first thing he did was to squint up at the sun. The second was to sneeze, and the third to blow his nose.

Which was literally true, for the sun seemed to be pretty queer. The whole sky seemed to be pretty queer, for that matter. Skies should be blue and the sun should be a bloated golden bauble drifting serenely across them. But the skies were not blue; they were a dirty purplish-gray. And the sun wasn't a bloated golden bauble; somebody had it by the scruff of the neck and was dragging it.

Gannett planted his big feet wide apart and frowned sourly around and sniffed the air like a dog at a gopher hole. "The damn world smells sick," he grunted.

Which was also true. The world did smell sick. The world smelled something like that peculiar odor that comes from an old graveyard carefully tended by an old man with dank moss sticking to the soles of his old shoes. That kind of smell.

Gannett didn't know why the sun looked sick, and he didn't know why the world smelled sick. Indeed, there were many things Gannett didn't know, among which would be these in particular:(a) He did not know (since, for the last six months, he had been living and working all alone at his little mine, which was in the remotest of the most remote desert regions of Nevada) that a little less than three weeks earlier, mankind had finally achieved the inevitable: man's own annihilation.(b) He did not know that he was going to be the loneliest man on Earth—he who was used to, and perfectly content with, the hermitlike existence of a desert rat.(c) He furthermore did not know that there were four of the Ten Commandments which he wasn't going to be able to break any more—not even if he stayed up nights trying and lived for centuries.

Gannett snorted the smell from his nostrils and shrugged. Hell with it. He thought about Reno and how he hadn't been there for nearly a year. He thought of the dimly lighted, soft-carpeted cocktail lounges in Reno where drinks come in long stemmed glasses and blondes in long-stemmed legs. Reno at Christmastime, he thought. There was a town, Reno!

He grinned, showing big gold teeth that blazed out of his mouth like the glittering grille on a Buick. He dug his feet into the hard ground and walked the hundred feet or so to his cabin where he sometimes slept when he didn't happen to sleep in the mine. He stripped off his grime-sodden clothes. He stepped out of them, in fact, and stretched luxuriously as though he hadn't felt the good joy of being unclothed for a long time.

He got up and went to a corner of the cabin, rummaged out a pair of dusty clogs and pushed his feet into them. Then—and they don't come any nakeder than he was—he went outside and around the shack to the rear where he kept his jeep and where the shower was.

He stepped into it, for it was nothing more ornate than a large oil drum suspended on long four by sixes. He yanked on a rope that hung down from the drum. The result of doing that made him leap out again dripping wet and colder than a buried mother-in-law.

He shivered, eyes blinking fast. He took a deep breath. His gold teeth went together tightly and the big muscles in his neck corded defensively. He deliberately went under the shower again. Pawing a sliver of laundry soap from a ledge on one of the four by sixes, he went to work with it, and when he finally tripped the hanging rope once more, he was a clean man.

He went into the cabin. It wasn't any warmer than the great outdoors, but that was where his clothes were. He shaved from an old granite basin full of cold water. After that he went to a hook on the wall and got down a suit of clothes which looked as though it had shriveled up waiting for somebody to wear it. The last thing he did before leaving was to pry up one of the boards behind the door and lift out of this hiding place a small leather bag.

The bag was filled with gold.

The sun was gone now. Leg-like rays of light still sprawled, dirty-looking, in the sky over toward the California line, but aside from these extremities, most of it was somewhere out in the Pacific. The purplish sky was darker now. Drab. Dead, somehow.

The old jeep started nicely. It always started nicely; that was one of the good things about a jeep. The only funny thing was that out of its exhaust pipe in the rear came angry purplish flames. Queer flames. Gannett stared at them, surprised.

"Even the damn jeep is sick," he muttered. He was wrong, of course, but he had no way of knowing that. He backed around, finally, and went down what he called his driveway, which was little more than rock-strewn ground, until he came to a small dirt road. This led him to another, larger dirt road, which in turn led him to route #395, which was a U.S. Highway.

A hundred miles farther on, he came to the outskirts of Carson City. It wasn't until he pulled into a gas station that he realized something was wrong. Nobody jumped out to wipe his windshield. The attendant who still leaned in the doorway of the station had a rag in his hand, but he didn't budge. He couldn't. His face looked like weathered leather and he was dead.

"Holy...!" whispered Gannett incredulously. He forgot about needing gas. He jumped in the jeep and drove down the main stem and found Police Headquarters in an old gray stone building. He knew it was Police Headquarters for the green neon over the revolving door had CPD on it and it was still burning.

He went up the steps two at a time, banged through the swinging doors and stamped straight to where the Sergeant sat at a desk over in the corner by the switchboard.

"Hey, by God!" yelled Gannett to the Desk Sergeant. "There's a guy down the street in a gas station and he's standing up in the doorway and he's dead as a mackerel!"

Dramatic words. But the Desk Sergeant was no longer among the living and didn't appreciate them. It took Gannett a long while to get over that. He slowly backed away. He made the big oak doors, still backing. He went down the stairs on legs as stiff as icicles.

He got back in his jeep and started up again. He knew there was something terribly wrong, but before he thought about it, he knew he had to have a drink. He pulled up in front of a saloon that had nice, cheery, glowing lights showing through the big front window. He got out of the jeep. He went through the swinging glass doors and straight to the bar.

Nobody answered. The barman behind the mahogany, facing him, didn't make a move. The barman had a dead cigarette between his cold colorless lips. The cigarette had a half inch of ash on it. The ash looked as though it was sculptured out of purple marble.

Gannett put both hands flat on the bar and swallowed hard. He twisted his head and looked over the shoulder of a customer on his left, who was leaning negligently on the bar with one elbow. There was a half-full bottle in front of the leaning man and it had an alert-looking horse's head stuck in the neck of it for a pouring spout.

Gannett sucked in a deep breath. He reached. He got the bottle. He blinked stupidly at the bottle and then he put it down very carefully and took another breath and looked at a highball glass in front of the leaning man. The highball glass was empty and clean, but the leaning man's fingers were curled lightly and gracefully around it. They were nice fingers. White fingers. Fingers that looked as if they hadn't had to do any hard work lately. Slender, tapering, carefully manicured fingers.

Gannett swore softly. He yanked the horse's head out and then poked the bottle into his mouth and tilted it up. He held it until there wasn't anything left but the very glass it was made of plus the bright little paper label. His throat burned. He coughed. He banged the empty bottle down on the bartop and coughed again—hard.

The leaning man stirred, seemed to turn slowly, stiffly, in a half arc that put him face to face with Gannett. Then he went down backward and all in one piece, like a tall tree on top of a hill on a very still night.