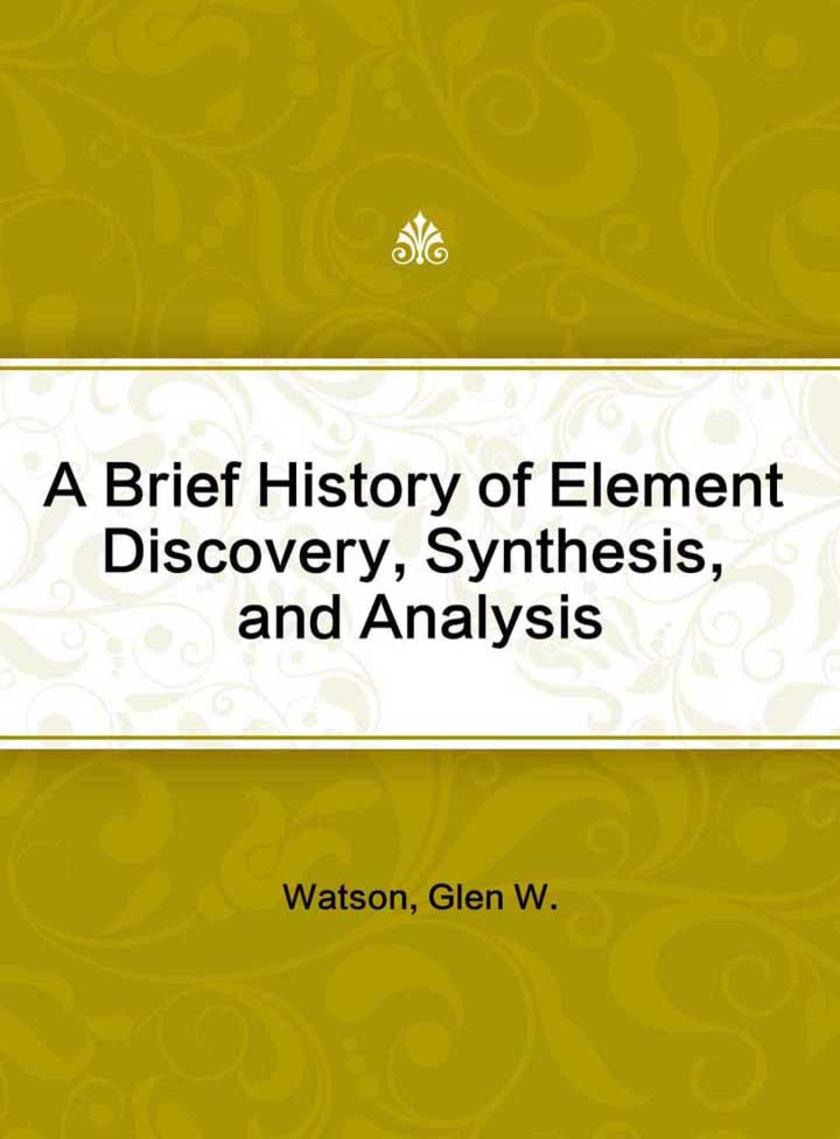 A Brief History of Element Discovery, Synthesis, and Analysis试读：

A BRIEF HISTORY OF ELEMENT DISCOVERY, SYNTHESIS, AND ANALYSIS

It is well known that the number of elements has grown from four in the days of the Greeks to 103 at present, but the change in methods needed for their discovery is not so well known．Up until 1939, only 88 naturally occurring elements had been discovered．It took a dramatic modern technique (based on Ernest O．Lawrence's Nobel-prize-winning atom smasher, the cyclotron) to synthesize the most recently discovered elements．Most of these recent discoveries are directly attributed to scientists working under the Atomic Energy Commission at the University of California's Radiation Laboratory at Berkeley.

But it is apparent that our present knowledge of the elements stretches back into history: back to England's Ernest Rutherford, who in 1919 proved that, occasionally, when an alpha particle from radium strikes a nitrogen atom, either a proton or a hydrogen nucleus is ejected; to the Dane Niels Bohr and his 1913 idea of electron orbits; to a once unknown Swiss patent clerk, Albert Einstein, and his now famous theories; to Poland's Marie Curie who, in 1898, with her French husband Pierre laboriously isolated polonium and radium; back to the French scientist H．A．Becquerel, who first discovered something he called a "spontaneous emission of penetrating rays from certain salts of uranium"; to the German physicist W．K．Roentgen and his discovery of x rays in 1895; and back still further.

During this passage of scientific history, the very idea of "element" has undergone several great changes.

The early Greeks suggested earth, air, fire, and water as being the essential material from which all others were made．Aristotle considered these as being combinations of four properties: hot, cold, dry, and moist (see Fig.1).Fig.1．The elements as proposed by the early Greeks.

Later, a fifth "essence," ether, the building material of the heavenly bodies was added.

Paracelsus (1493-1541) introduced the three alchemical symbols salt, sulfur, and mercury．Sulfur was the principle of combustability, salt the fixed part left after burning (calcination), and mercury the essential part of all metals．For example, gold and silver were supposedly different combinations of sulfur and mercury.

Robert Boyle in his "Sceptical Chymist" (1661) first defined the word element in the sense which it retained until the discovery of radioactivity (1896), namely, a form of matter that could not be split into simpler forms.

The first discovery of a true element in historical time was that of phosphorus by Dr．Brand of Hamburg, in 1669．Brand kept his process secret, but, as in modern times, knowledge of the element's existence was sufficient to let others, like Kunkel and Boyle in England, succeed independently in isolating it shortly afterward.

As in our atomic age, a delicate balance was made between the "light-giving" (desirable) and "heat-giving" (feared) powers of a discovery．An early experimenter was at first "delighted with the white, waxy substance that glowed so charmingly in the dark of his laboratory," but later wrote, "I am not making it any more for much harm may come of it."

Robert Boyle wrote in 1680 of phosphorus, "It shone so briskly and lookt so oddly that the sight was extreamly pleasing, having in it a mixture of strangeness, beauty and frightfulness."

For the next two and three-quarters centuries the chemists had much fun and some fame discovering new elements．Frequently there was a long interval between discovery and recognition．Thus Scheele made chlorine in 1774 by the action of "black manganese" (manganese dioxide) on concentrated muriatic acid (hydrochloric acid), but it was not recognized as an element till the work of Davy in 1810.

Occasionally the development of a new technique would lead to the "easy" discovery of a whole group of new elements．Thus Davy, starting in 1807, applied the method of electrolysis, using a development of Volta's pile as a source of current; in a short time he discovered aluminum, barium, boron, calcium, magnesium, potassium, sodium, and strontium.

The invention of the spectroscope by Bunsen and Kirchhoff in 1859 provided a new tool which could establish the purity of substances already known and lead to the discovery of others．Thus, helium was discovered in the sun's spectrum by Jansen and isolated from uranite by Ramsay in 1895.

The discovery of radioactivity by Becquerel in 1896 (touched off by Roentgen's discovery of x rays the year before) gave an even more sensitive method of detecting the presence or absence of certain kinds of matter．It is well known that Pierre and Marie Curie used this new-found radioactivity to identify the new elements polonium and radium．Compounds of these new elements were obtained by patient fractional recrystallization of their salts.

The "explanation" of radioactivity led to the discovery of isotopes by Rutherford and Soddy in 1914, and with this discovery a revision of our idea of elements became necessary．Since Boyle, it had been assumed that all atoms of the individual elements were identical and unlike any others, and could not be changed into anything simpler．Now it became evident that the atoms of radioactive elements were constantly changing into other elements, thereby releasing very large amounts of energy, and that many different forms of the same element (lead was the first studied) were possible．We now think of an element as a form of matter in which all atoms have the same nuclear charge.

The human mind has always sought order and simplification of the external world; in chemistry the fruitful classifications were Dobereiner's Triads (1829), Newland's law of octaves (1865), and Mendeleev's periodic law (1869)．The chart expressing this periodic law seemed to indicate the maximum extent of the elements and gave good hints "where to look for" and "the probable properties of" the remaining ones (see Fig.2).

Workers using traditional analytical techniques continued to search for these elements, but their efforts were foredoomed to failure．None of the nuclei of the isotopes of elements 43, 61, 85, and 87 are stable; hence weighable quantities of them do not exist in nature, and new techniques had to be developed before we could really say we had "discovered" them.

In 1919, Rutherford accomplished scientifically what medieval alchemists had failed to do with "magic" experiments and other less sophisticated techniques．It wasn't gold (the goal of the alchemists) he found but something more valuable with even greater potential for good and evil: a method of transmuting one element into another．By bombarding nitrogen nuclei with alpha particles from radium, he found that nitrogen was changed into oxygen.

The process for radioactive transmutation is somewhat like a common chemical reaction．An alpha particle, which has the same charge (+2) and atomic mass (4) as a helium nucleus, penetrates the repulsive forces of the nitrogen nucleus and deposits one proton and one neutron; this changes the nitrogen atom into an oxygen atom．The reaction is written

The number at the lower left of each element symbol in the above reaction is the proton number．This number determines the basic chemical identity of an atom, and it is this number scientists must change before one element can be transformed into another．The common way to accomplish this artificially is by bombarding nuclei with nuclear projectiles.

Rutherford used naturally occurring alpha particles from radium as his projectiles because they were the most effective he could then find．But these natural alpha particles have several drawbacks: they are positively charged, like the nucleus itself, and are therefore more