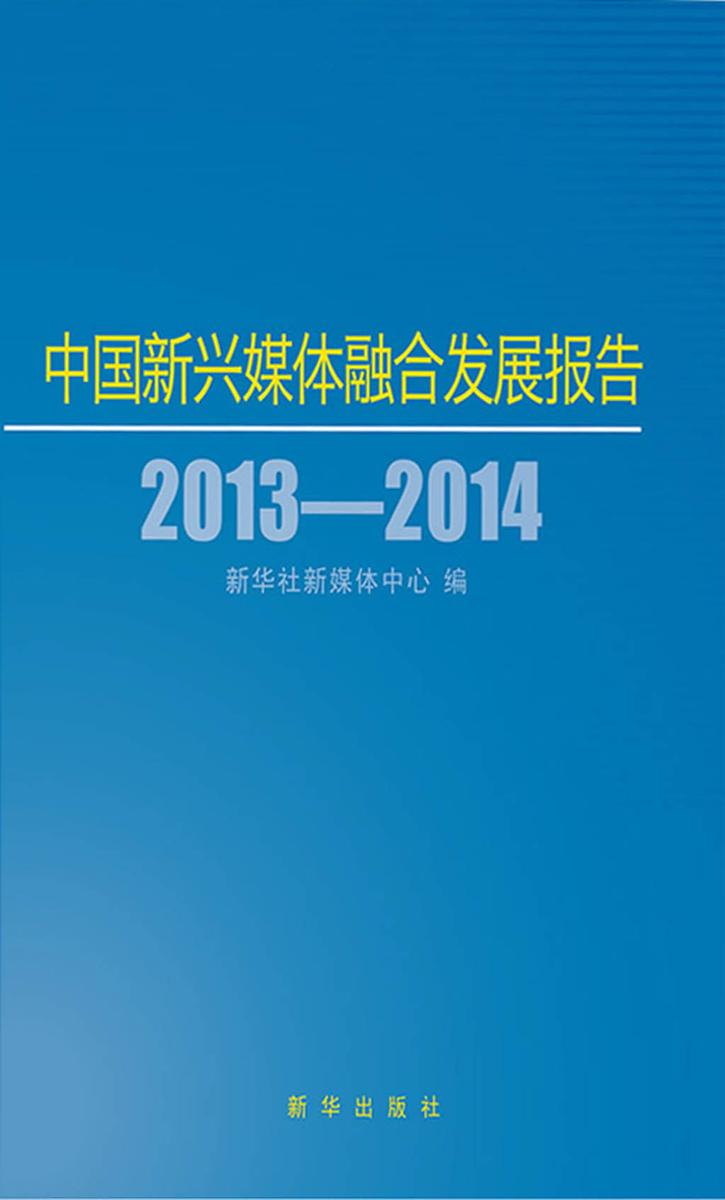 New media have become an innovative force that comprehensively pushes forward economic, political, cultural, mass communications and social development.Many big countries in the world are actively developing new media.Since 2013, China has set a strategic goal to grow into a power in new media from its current status as an Internet big country．

The year 2013 saw a key juncture in China's new media development.New media's position as the foremost media became more evident as they had turned into a new engine for China's further development, becoming more mobile, integrated and socialized, with the number of their users growing steadily and their innovation further enhanced.Their applications better met social needs, their market competition was both vigorous and orderly, and their industrial patterns were open and expanded, displaying more positive social power．

Since 2013, new media development in China has displayed the following six characteristics:First, the development goal has been fundamentally changed from becoming bigger into becoming stronger.Second, it is in the crucial period of mobile development.Third, China's new media have become a mega industry. Fourth, China is turning into an innovator from a learner.Fifth, new media in China are increasingly socialized.Sixth, new media enjoy a massive scope of develop-ment．

Spurred by technologies related to mobile Internet, cloud computing, big data and the Web of Things, new media in China have increased their capacity for independent innovation, and enterprises in this field continuously produce innovative applications, which, as represented by WeChat, show that Chinese enterprises boast independent products and capacity for pattern innovation．

Since 2013, new media technologies have been enjoying an important deve-l opment opportunity, with mobile Internet, big data and cloud computing being the focuses of new media technological development in various countries.In the new round of technological competition, China has been accelerating research and development of 4G and 5G, as well as the commercial applications of technologies and the construction of facilities.This holds great significance for the stimulation of information consumption and domestic demands, as well as the realization of national innovation strategies．

Xi Jinping, general secretary of the Central Committee of the Communist Pa-r ty of China, said:“Without cyberspace security, there would be no national security.”Cyberspace, with Internet at the core, has become the fifth biggest strategic space after land, sea, air and space.All countries attach great importance to cyberspace security.In 2013, the PRISM scandal revealed by Edward Snowden stunned the world and aroused unprecedented concern about cyberspace security.Cyberspace security in China is generally stable, but still faces cyberattacks and security challenges, which not only affect the interests of Internet users and the healthy development of the industry, but also pose threats and challenges for social, economic development and national security．

Since 2013, new media in China have been the most active capital market worldwide.Major Internet companies are not longer focused on the development of their own fields.Instead, they pay more attention to cross-industry development and are penetrating into traditional industries at an increasing speed.As a result, the capital market has been extremely active.IPOs, acquisitions, and fund raising constitute the main themes of the reshuffling efforts of the new media industry．

Since the Internet thrived, the media industry has experienced unprecedented changes.The mobile age has had a revolutionary impact on the ecology of mass communications.Currently, new media in China are transforming into digital, mobile and micro communications at an increasingly fast pace.In the era of micro-communications, China's news media are becoming more active, with new media and traditional media undergoing fast integration.Traditional media are becoming increasingly digital, intensifying integration with new media and developing such new communication models as Weibo, WeChat and news terminals．

Based on China New Media Development Report 2012-2013, China New Media Development Report 2013-2014 continues to adopt a global perspective with attention to Chinese characteristics.It contains a more open structure and rich contents divided into 15 parts——Overview, On innovation, On technology, On applications, On finance, On security, On capital, On industry, On media, On society, On regulation, On management, Hot issues, Prospects and Proposals.It comprehensively records the progress of new media in China in 2013, analyzes hot issues related to new media, predicts the direction in which new media in China will develop and offers proposals on how to boost the healthy development of the new media industry in China．Preface

The annual China New Media Development Report, the second of its kind, was compiled by the New Media Center of Xinhua News Agency．

Globally, the new media industry has been experiencing transition to mobile Internet, which is the strongest driving force behind the booming media.The markets of new media in emerging economies have the largest potential.Among them, the Chinese market is most dynamic．

China makes it a national strategy to promote itself toward a world powe-r house in the field.New media in the country has been gearing up since 2013 to shift and develop toward mobility, integration and socialization.The number of new media users has been steadily growing, innovation capacity gradually improving, applications more compatible to social needs, market competition vigorous and orderly, industry structure exoteric and expansive, and positive social effects emerging．

China has the world's biggest population of new media users, with Internet surfers exceeding 600 million and mobile phone users 1.2 billion.Such a huge domestic market, plus other positive factors such as a national“Broadband China”strategy, the booming mobile I nternet and construction of information infrastructure in rural areas, will greatly boost the prosperity of the new media industry in China．

The official ranking of new media as the most important media was a landmark change in 2013.This fresh industry has become a new engine of the comprehensive and deepening reform that China is going for．

The country has the world's most dynamic new media market and is vigo-r ously marching into the global market.Chinese new media enterprises are stepping up their trans-boundary development.New technologies such as cloud computing and big data have been increasingly commercialized, while new applications based on the mobile Internet are mushrooming.New media's capital market has become extremely vibrant, its structure and market operations developed to further breadth and depth, its domain further extended, and the scale of economy further enhanced．

Since 2013, major countries in the world have vehemently boosted the devel opment of new media and its management.They have also constantly launched new cyberspace security strategies, as problems concerning information and Internet security are looming large in the process of integration between new media and the society.Based on their own national and social conditions, many countries have fortified the management of new media while developing it.After the 18th National Congress of the Communist Party of China（CPC）, China strengthened the top-down design of new media development, further stimulating new technologies to upgrade the industry.Furthermore, the Third Plenary Session of the 18th CPC Central Committee took cyberspace and information security as a vital issue concerning national security and social stability.It urged to speed up the improvement of cyberspace administration and set up a central Internet security and informatization leading group in consideration of national security and longer-term development.The group will coordinate key issues of cyberspace security and informatization regarding economy, politics, culture, society and defense, map out development strategies and key policies for Internet security and informatization, push forward legislative construction for the sector, enhance Internet security protection capacity, and initiate the strategic goal of building a heavyweight global player in the industry of new media．

This report, from both global and national perspectives, tracks record of China's developing process of the new media industry from such aspects as trend, innovation, technology, application, finance, security, capital, industry, communication, society, administration, as well as law and regulation.It analyzes hotspots, predicts future trends and makes proposals on the healthy development of the industry in China．一、概况篇